Why America’s Hinterland is Looking Towards India’s Metros

The green rolling fields where cows and sheep graze peacefully, the distant hills, the moldy wicket, the restless stream and dogs sleeping quietly on the front porch. If you can imagine a postcard representing beautiful and idyllic rural America, perhaps this is it. As you drive through some of these picturesque and quaint settlements in the American hinterland, it is easy to lose oneself in nostalgia and romance. Look a little closer and you will soon exclaim – damn! Where are all the young people! Fact is, they are not there. The American countryside, full of the promise of romance and heavy with a feeling of nostalgia, hides a secret. Its young have long disappeared, leaving behind small towns and villages, which are almost uniformly grey.

The high streets, once lined by little mom and pop stores and where the baby boomers got their first lessons in employment as hired helps during their holidays, are today dominated by Walmart and McDonalds – which offer only minimum wage jobs for the locals. The young have left, never to return. With them has disappeared the promise of enterprise and a generation which would naturally be the most aspirational. This has, in turn, affected the economic balance of these small towns and settlements. Once thriving with small enterprises, most now depend heavily on agriculture.

For generations in our national life, progress was the preserve of cities……Inventions, standards of services, and social styles and trends lagged in their adoption in rural areas. The countryside was a time machine in which urbanites could see the living past, and feel nostalgic or superior, as the sight inclined them.

The post millennial generation places greater emphasis on a college education and hence have a strong bias in favor of white collar jobs, especially in IT and knowledge sectors. This has also led to a bias against blue collar jobs, despite some of them being well paying. With major education centers located in the larger cities, often in and around metropolises, young people leave town immediately after school, almost never to return. Not that the seniors are holding them back much either. A study conducted by the Washington Post in collaboration with the prestigious Kaiser Family Foundation states that roughly 3 out of 5 adults in rural America would encourage their next generation to leave town for greener pastures. (The irony!) In fact, the phenomenon of talent exodus is the highest in rural America; by some distance, too, as the statistic below will show! 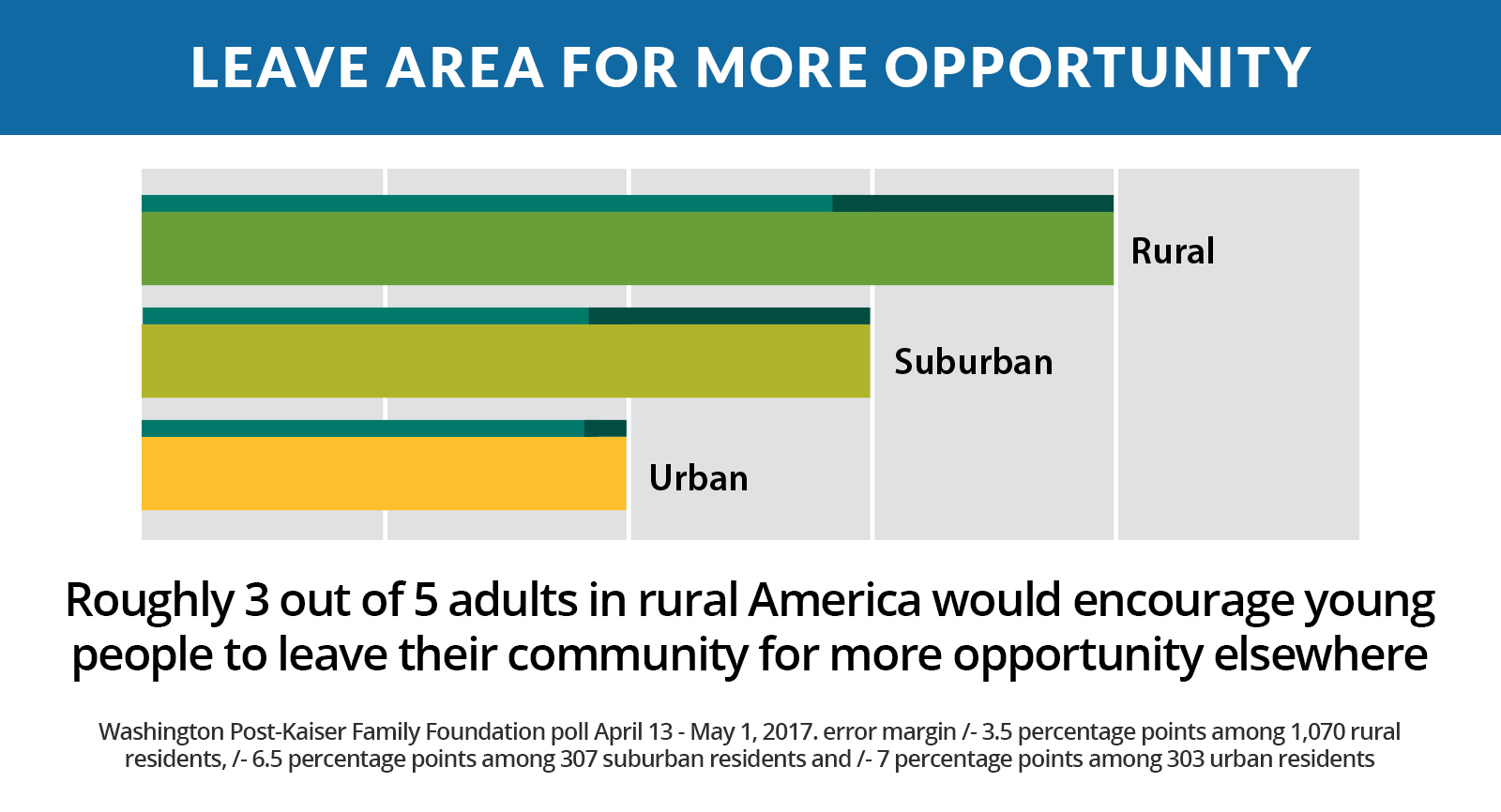 This has resulted in a unique situation. Small and medium enterprises, which once thrived in the hinterland of America are increasingly finding it difficult to find proper talent locally. Especially in today’s world, when the concept of market is a lot different and lines have been majorly blurred post the dot.com revolution. In order to survive and flourish today, almost all businesses need some form of technical intervention. Having an online presence, social, digital marketing etc., are today essential pieces of the puzzle. With the hollowing out of youth in rural America, it has become difficult to find the right sort of talent to do this kind of work. Accessing a global market for a small or medium-sized enterprise thus becomes an issue worth exploring.

Some outsource this kind of work locally. However, hiring an agency is expensive and if the scope of work is limited, engaging one can seem unwise. And yet, not hiring is also not an option. This is where offshore virtual assistant companies has been a timely addition to the landscape and might yet prove to be a minor game changer.

Outsourcing has primarily been the preserve of the big boys till date. Large corporations have consistently shifted operations out to offshore hubs for reasons ranging from financial savings, talent accessibility to acquiring of new markets. Small and medium enterprises have largely been out of this game, since outsourcing, despite long term financial gains, requires initial investment into fresh infrastructure and processes. Neither have such industries felt such an acute need for or the crunch of talent locally.

However, with the emergence of virtual employees and assistants, it has become possible to engage the services of overseas talent for small and medium businesses as well. Engaging remote assistants is quite easy, and does not require any initial capital investment. It’s more like a service or a subscription. Thanks to cloud computing, business owners can monitor their work directly and once their requirement is over, can easily call time on the partnership too.

This way, the problem one faces locally regarding accessibility to talent can be easily overcome. The outsourcing hubs in countries like India, which is universally regarded as the outsourcing leader, are mostly in metropolitan regions, with high concentrations of skilled and highly educated professionals, not unlike the US. This means, that while hiring locally might entail positions to remain vacant for long periods, offshore outsourcing partners are able to provide multiple choices to their clients for the same position/s and thereby lead to exceptionally quick hiring. This inevitably leads to a higher standard in the quality of candidates selected. And since the candidates are geographically located in India, they are also very affordable as compared to talent sourcing locally or outsourcing to agencies in the larger cities in the US.

A helping hand and a possibility

Thus, virtual assistants located in large Indian metropolitan areas are today working for many small and medium enterprises in the hinterland of the United States. There are several enterprises that have benefitted significantly from this association and have been able to source highly skilled talent in specialized domains to expand their businesses. Such partnerships have the potential to help turn around the declining fortunes of hinterland America. Despite mass migration of the current generation, there is still enough talent to spur economic growth in such regions. A bit of unorthodox help, and out of the box thinking can’t hurt. Who knows, with rising costs of doing business in the traditional centers, businesses, especially technology startups might look for alternative hubs. If that happens, then hitherto stagnant regions might see a boom, with a new kind of work culture and fresh entrepreneurial interest.

Previous
Employee lawsuits- a fearful bogey for small ...
Next
The Outsourcing Butterfly Effect...