The H1B conundrum and the possible way out

Recent developments in Washington regarding H1B visas has thrown up some interesting questions. Should H1B visas be reduced to ensure that more Americans be hired in technology companies in the US? Are the companies misusing the H1B visa system and hiring cheaper resources from outside America at the cost of Americans? A recent class action against major technology companies further lays bare the fault lines that seem to have developed regarding this issue. And yet, amidst all the clamor, there is one question that needs to be asked, a question whose answer will perhaps define the true strength of American companies and how competitive they can remain so in future. Does America have enough people?

No, this isn’t a pro-immigration argument in the garb of something else. America is the third most populous nation on earth (US Census, July 1, 2018) with a population density of just below 100 per square mile. Whether America needs more people is up for debate and I am not going to weigh in on that. My question pertains to the talent available and the quality of that available talent.

An overwhelming majority of Americans are employed in the services sector. The below chart from Statista shows that this has been the case since the last ten years. 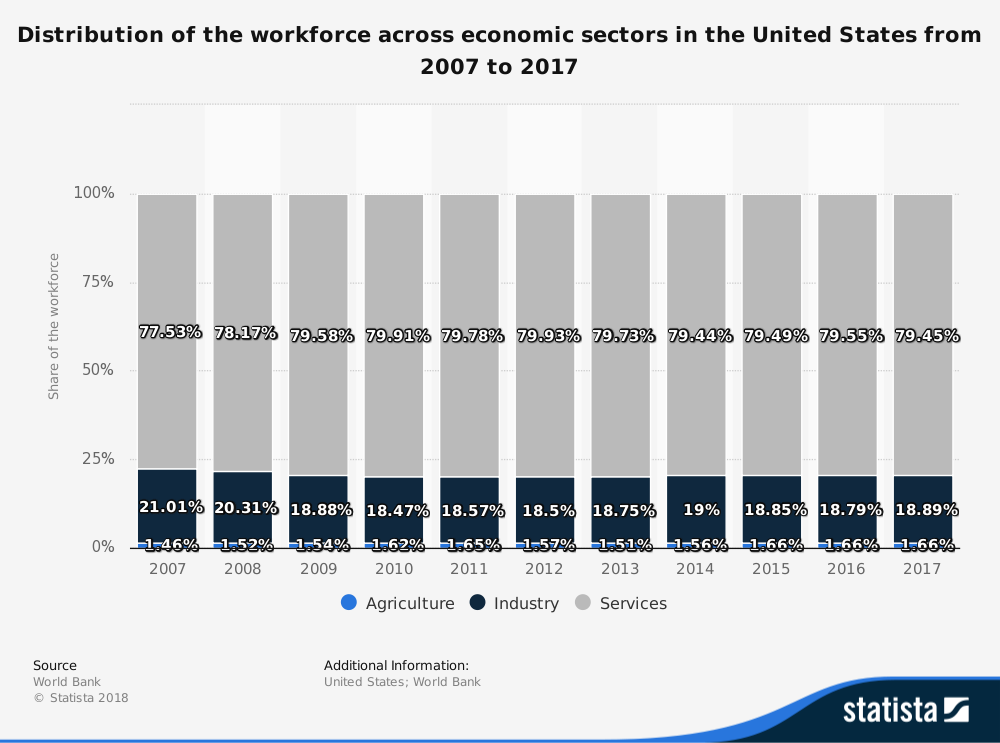 This is understandable for a developed economy and the numbers perhaps won’t seem as stark when compared to other developed economies globally. However, it does show that the United States workforce has either reached or is very near the threshold beyond which the available workforce for services will simply not be able to keep pace with demand. The majority of the workforce has been tapped and let’s not forget that the US has an educationally mature and a slightly greying workforce. Considering that only about a third of the population actually goes on to attain a college education, it isn’t difficult to imagine the state of affairs in domains that require a highly educated and highly skilled workforce. And it is here where I believe that the focus should be. American firms, who make up the overwhelming majority of the top IT and technology firms globally, will create an “X” number of jobs in the next ten years. That IS A CERTAINTY. How many will depend on a lot of factors. But jobs WILL BE CREATED with new technology startups coming to life, and current ones consolidating. So the debate isn’t whether, but how many will the number “X” constitute. The question then that needs to be answered in this context is, will America be ready for that number “X”?

The absence of choice

Unlike manufacturing jobs, the majority of which have been offshored to China, services have a few prerequisites. The workforce needs to be highly educated and creative. Experience and skill are directly proportional to success in this field, even in profiles that are highly repetitive and most closely resemble assembly line jobs in a manufacturing plant. One does not even need to be a high school graduate to operate an assembly line. One needs to be either previously experienced or at least enrolled in a law degree to even apply for paralegal job. Most paralegals in top law firms are law graduates waiting to pass the bar. Your average web developer needs to be at least a technology graduate. Technology has ensured that jobs which were mostly secretarial in nature have been wiped out long ago. The bar in services is simply too high.

Now college degrees cost money. By the time they start looking for jobs, the average American college graduate has around $37,172 in student loan debts. Collectively, America has $1.5 trillion in student debt. (Here’s how much the average student loan borrower owes when they graduate- Abigail Hess, 15th February, 2018, CNBC). Considering that only about a third of the high school graduates go on to get a college degree, as already mentioned above, that is some number! With college education this expensive, salary expectation for graduates in services is obviously, high. Here are a couple of charts with projected salaries for those who complete their bachelors and masters in America, for the year 2018. 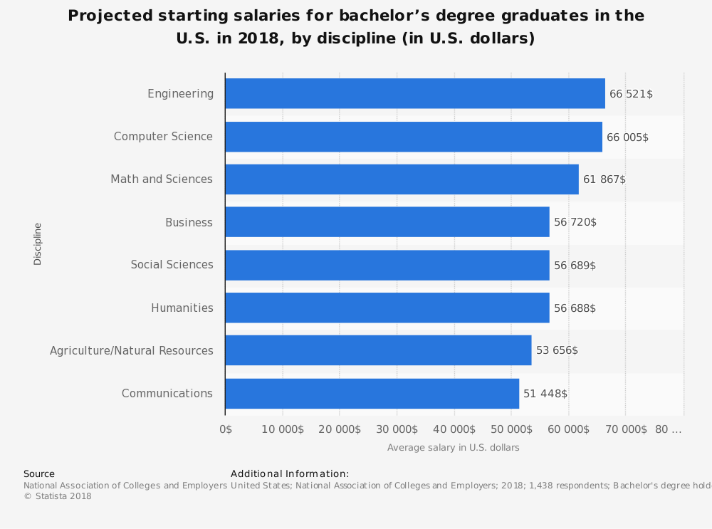 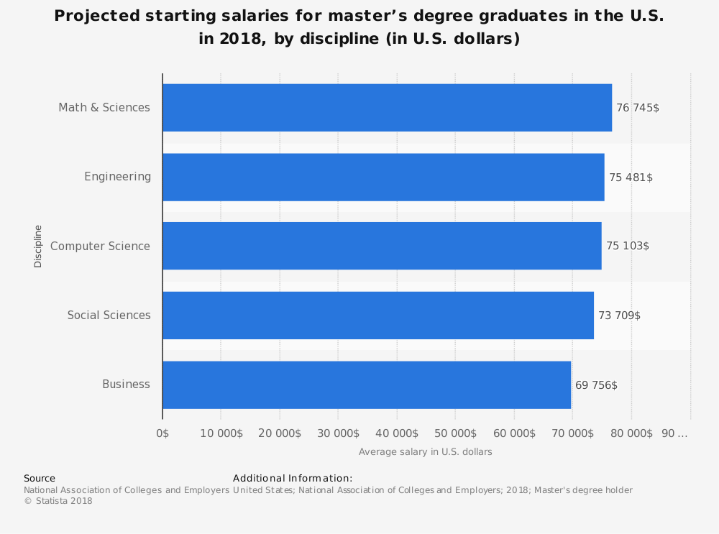 Yet, even with such high numbers, businesses don’t seem to flinch. They are happy to pay, and pay more to get the right talent on board. From this trend one can easily make two inferences.

1. Businesses consider talent to be crucial for their success.

2. There is a shortage of said talent, leading to scarcity and higher payouts.

H1B visas are specifically given out to fill this gap in supply of highly skilled labor. Without this supply, the scarcity would be so acute that salaries would shoot through the roof and operating costs of large firms would spiral out of control. Why did I specifically mention large firms? Anything and everything else will not even be in the reckoning. This is a race that smaller businesses and startups are not equipped to run. And the debate whether the situation isn’t already this stark for them is very much alive and kicking.

So H1B visa holders are supposed to plug the shortfall in talent for high end services and are supposed to arrest the upward momentum of salaries to saner proportions. As we had talked about already, there is now even a debate whether there are too many of H1B visas being given away and whether technology firms are favoring H1B applicants more than Americans. There is also a perception, not ill founded either, that highly skilled professionals with H1B visas are more malleable in terms of salaries and will happily work for a few thousand dollars less. They, after all, do not have to worry about enormous student loans to pay off and have lower expectations. Working at even a higher fraction of the standard remuneration offered to American professionals is a massive step up for these H1B professionals, a lion’s share of whom are from South Asia. 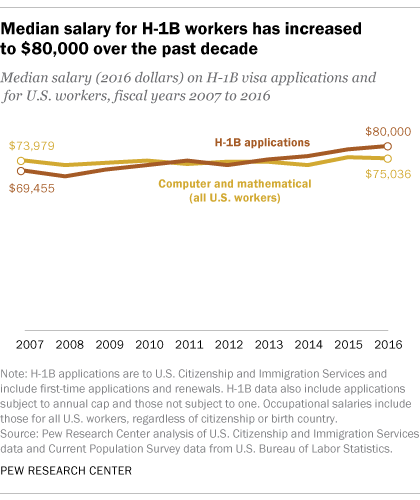 In line with President Trump’s tough stance on immigration, a Congressional committee announced a minimum cap of $90000 a year for H1B professionals in 2017, a move aimed at obliterating any price advantage they might have over Americans. Yet this report Pew Research Center tells a very different story when it comes to the perceived price advantage that H1B applicants have had traditionally.

Even before the announcement of a lower cap on salaries of H1B workers, the average salary of H1B workers was more than what Americans earned in similar profiles. In fact technology and social media giants like Apple, Microsoft, Facebook and Google reported average salary packages as high as $140000 and above! (Pew Research Center) So clearly, the price advantage is not even an issue here. H1B workers are paid more and yet are in very high demand. Clearly, companies are not averse to paying higher salaries for the right candidate. So what does this prove? Clearly, there is a severe shortage of talent in the States for such profiles. Based on this, one can argue that the tough stance against immigration by the Trump administration needs to be reversed, and that America in fact needs more people. This has already been argued by the management at top tech firms, who have decried these measures as debilitating. However, again, without trying to proffer an opinion here, one simply cannot wish away government policy. The Federal government is there to look at a picture that is bigger and more versatile than what is in front of technology giants like Facebook and Apple. We are all free to debate the decisions and even question the veracity of the picture being painted, but the fact remains that there is a talent shortage, and with the American government toughening its stance against immigration of any kind, the American white collar workforce will struggle to meet the figure “X” that we have already talked about.

This is where I believe that offshoring will come in. It simply has to. There is no other viable solution in sight. If talent cannot be brought in, work must go out to these talents. And in terms of being a purely business decision, it is the only one which makes sense. Businesses can simply source the shortfall from established and talent-rich technology centers like Bangalore, Hyderabad, Delhi and Mumbai in India, Dublin in Ireland, Lagos in Nigeria and Cebu in the Philippines. Close to two thirds of H1B visa applicants are Indians anyways. Companies will tap the exact same talent pool, except that they will be doing it without bleeding so much in employee remuneration. They can still be the fattest paymasters in countries like India, and attract the absolute cream in the talent pool. In terms of seeking and acquiring talent, no other solution (if any) is such a win-win.

If current trends were to continue, I am seeing an increased reliance on offshore staff for American technology and service oriented corporations. The earlier companies come and set up shop in these locations, the better.

Before I finish, I would like to add on a very personal note that large student loans do put the average American professional at a severe disadvantage on the world stage and, in my opinion, curtails the very same entrepreneurial spirit amongst the youth that has been the cornerstone of “America- the incredible success story.”

Previous
How has Outsourcing become an unlikely cyber ...
Next
Expecting immediate results in SEO is a mista...