Survival Guide for Businesses: Continuous Innovation is Key, and Cloud Computing a Tactic

The many scientific theories on the biological evolution of humans reveal how we evolved from four-legged primates to our present form. The one notable change that occurred when our ancestors abandoned life on all fours, and developed the ability to stand upright, was that it opened up a whole new world of opportunities. Walking upright freed their hands, which meant they could now touch, explore, and learn from their surroundings. They now used their hands to create and build new tools for hunting, thus making it far easier to survive. As time passed by, hunter gatherers turned into agriculturists developing basic tools like spears, ploughs, and hammers. A few thousand years later, mankind propelled on industrial revolution. This gave way to a new form of life—organized workflow, standardization, and eventual automation. With thanks to the many advancements made over the years, we now live in the age of Information Revolution.

Information revolution commenced with the creation of computers and internet—an innovation that allowed businesses around the world to share knowledge, make faster decisions, strategize, and overall, bring about a massive change in global economy. The invention of computers has led mankind to not just merely build hand tools, but brain amplifiers instead. It’s no wonder Steve Jobs referred to computers as “bicycles for the mind”. This need to acquire information, spread information and to set oneself apart from competitors led to a new wave of technological innovation—cloud computing!

The Evolution of Cloud Computing

Although cloud turned into an all-powerful behemoth in the 21st century, the initial concept of cloud dates back to the 1950s with mainframe computing. Since mainframe computers were huge machines and were extremely expensive to maintain, it was impossible for organizations to afford more than one or two machines. As a result, during the mid-1960s, American computer scientist JCR Licklider developed ARPANET—Advanced Research Projects Agency Network. This network allowed several digital inputs and sources to be shared among computers that were present in different locations; in short, a world where any person could access information from any place was now made possible for the first time. The launch of ARPANET thus set forth a motion of advancements in cloud technology. So when one looks back at the evolution of cloud computing, there exists 3 broad phases:

According to ample research conducted in the field of cloud computing and outsourcing, researchers have found two key objectives among companies that outsource—Cost Savings and Variable Capacity. So when one looks at these two aspects, the concept of cloud computing fits in perfectly with a company’s operational strategy. One of the biggest advantages of cloud computing lies in the fact that it allows companies to reduce capital expenditure, IT staff, HR and payroll staff, and much more. So, as the head count in an organization shrinks, the business is now in a position to not only save costs but also concentrate on the core areas of a business. To understand the concept of cloud and outsourcing in its entirety, and how they go hand-in-hand, here’s a video of Shaunvir Mahil, MD, Virtual Employee, speaking at the 2015 Social Media Week—London.

VE Pioneers the Concept of a Cloud Company

As rightly stated in the above video, “The cloud is cheaper, faster, reliable, and more scalable”. When Virtual Employee launched itself in the year 2007 (the same year that cloud phase emerged), it pioneered the concept of forming an entire company in the cloud. As a result, business clients located in any part of the world could now run their office remotely entirely via the internet; in short, any work that can be performed via the internet within a traditional company, can now be performed at VE.

Streamlining: Virtual Employee allows its clients to either hire a dedicated resource or an entire team of resources, and takes care of several operational and investment costs like HR, IT, Admin, Tech Support, Payroll, Hardware and Infrastructure, and much more. As a result, an entrepreneur or a businessman can invest all his time and energy into core revenue-generating activities and in-turn take their business to the next level.

Scalability: For any business, scalability is a huge gamble, a risk, they’re never fully willing to take. VE addressed this issue as a cloud company and thus frees all its clients from yearly contracts. With a mere 15-30 days’ notice, clients can whittle down their team size without having to waste time or pay for employees to sit on the bench.

Lower Risks: With a cloud company like VE, you can launch new projects and businesses with the least amount of risk with respect to capital investments. As a result, you can now instead engage in experimentation, greater innovation, and a true entrepreneurial spirit.

Organizations around the world have realized the importance and scope of cloud; which is why ADP offers payroll services over cloud, Tata Communications offers infrastructure-as-a-service (IaaS), Accenture offers cloud platform to its clients, Infosys tied up with Huawei Technologies to offer cloud services, Microsoft and Hitachi Limited expanded its cloud offerings, and the list goes on and on. As a result, in 2018, the cloud computing market was projected to be worth $178 billion, which is expected to cross a well over $230 billion by the year 2020; viz to say that in less than a decade, the cloud market skyrocketed from mere $6 billion to a triple figure. 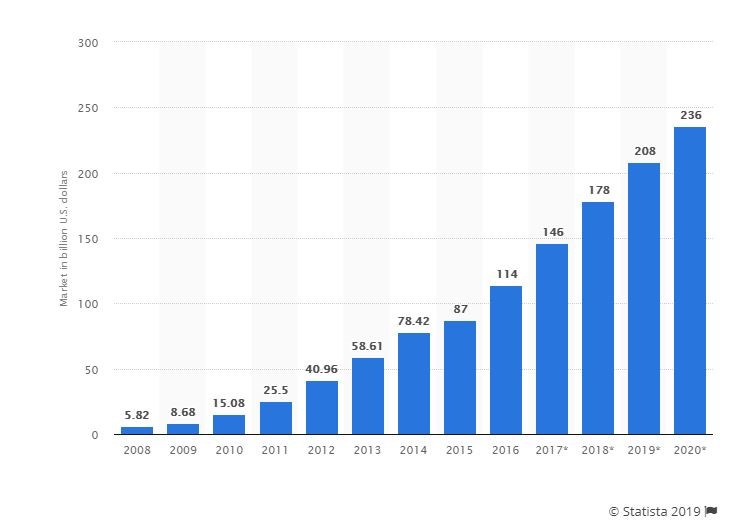 The Future of Cloud—2019 and Beyond

According to a 2018 Cloud Computing study conducted by IDG, over 73% of organizations around the world are making use of cloud computing services, out of which 42% are on multi-cloud platforms. The reasons for opting a cloud strategy was found to be a) easier and faster disaster recovery (40%) and b) increased cloud options (59%). And finally, the remaining 17% of organizations that were found to be on no cloud platform, revealed they planned on doing so in the next 12 months.

Cisco and Qualcomm, two of America’s leading MNCs, is currently working on a concept that is an extension of Internet-of-Things (IoT). Coined as the Internet-of-Everything (IoE), it aims to bring together “people, process, data, and things to make a networked connection more relevant and valuable than ever before”, as reported by Cisco. So, by bringing the various features of cloud computing—SaaS, IaaS, PaaS, Storage-as-a-Service, Desktop-as-a-Service, and Disaster Recovery-as-a-Service, under a single umbrella—Everything-as-a-Service (XaaS), it provides companies a wide range of flexibility, thus upending business operational models altogether.

Further, a recently published report on liveMint highlighted how Michael S. Dell, CEO, Dell Technologies, dedicated a copious portion of his keynote speech to cloud computing at the Dell Technologies World 2019 in Las Vegas. Michael Dell announced that his company has partnered with Microsoft Corp. to deliver VM ware cloud infrastructure on Azure. This integration of services will now enable a streamlined infusion of advanced capabilities like IoT, Machine Learning, and Artificial Intelligence (AI). Dell and Microsoft are not the only players in the cloud computing world. In February 2019, IBM announced a whole new set of services for cloud strategy and design that seeks to find new and improved ways to combine data, AI, and other technologies in order to accelerate digital transformation.

Renowned cloud vendors like Microsoft, Amazon, and Google are working hard to gain a competitive edge in the market by providing an easy cloud migration and hybrid cloud solution in its entirety. Thus, if there is one thing that businesses around the world can learn, it is the fact that innovation is perpetual; a continuous endeavor. The next phase of cloud computing will thereby witness more than mere support and maintenance, but a business transformation that is ruled by innovation and facilitated by the cloud.

The Process of Continuous Innovation

The biological evolution of our ancestors to stand upright enabled them to innovate tools and lead a life as agriculturists from hunter gatherers. From small communities, they turned into colonies, and eventually countries; from man-made tools to machines and industries; from using pigeons as messengers to using the internet to communicate across continents; each one of these advancements point to one single concept—the process of continuous innovation. So, as MNCs around the world seek to innovate and improve their existing designs on cloud computing, it is only a matter of time that all SMEs jump on-board as well. And going by the figures of IDG, 17% of global world businesses who haven’t reaped the benefits of “cloud nine” is in fact a really small number!

Previous
Data Security: Our Obligation—How VE Keep y...
Next
Avoiding the pitfalls of outsourcing while re...