How Outsourcing Can Help You Overcome Opportunity Cost Cognitive Biases 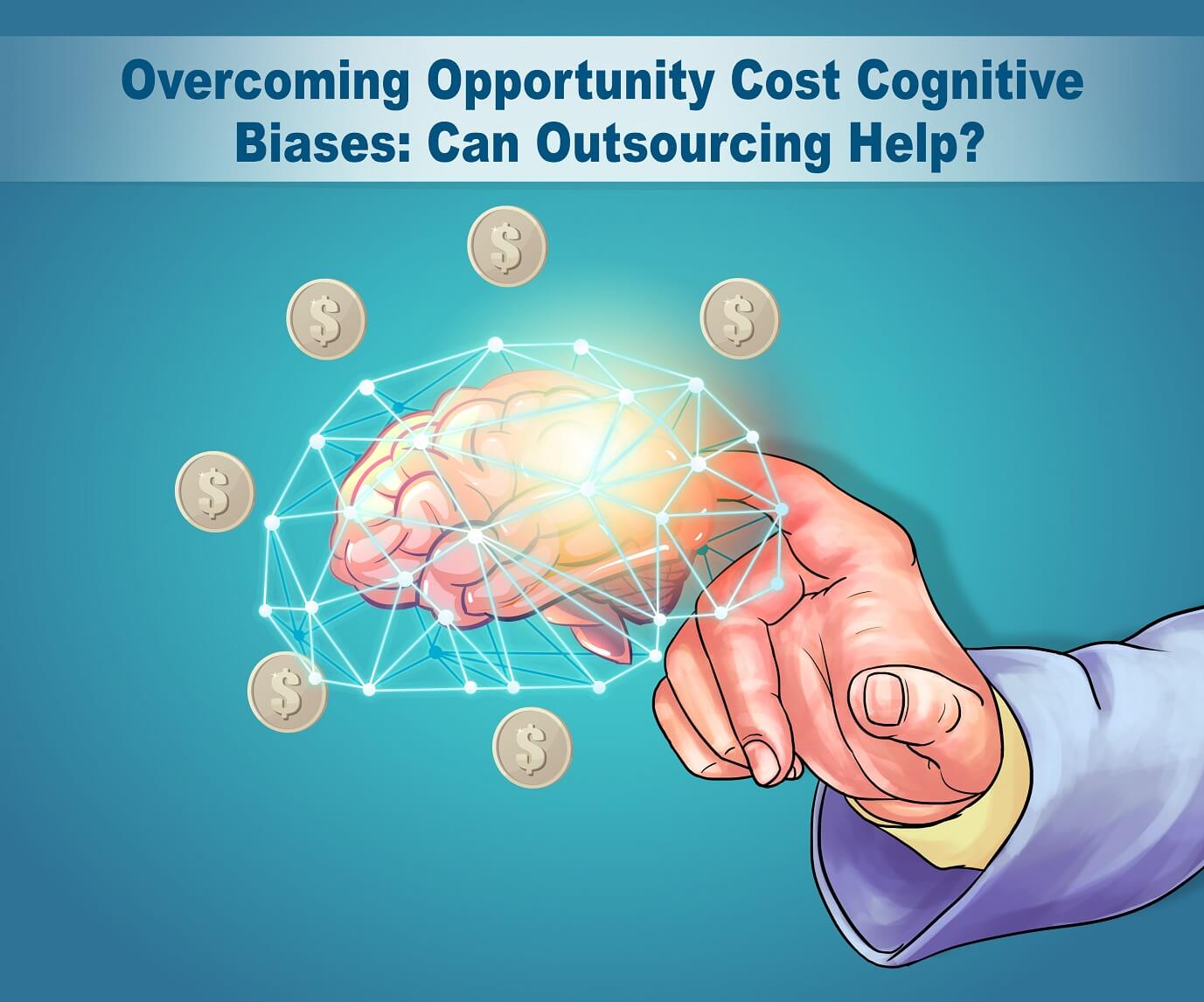 “The biggest risk is not taking any risk,” the wise men – and women – say.

Notice the double dash? Well, it is because we all have biases – Cognitive Biases. A well-dressed person would naturally exude efficiency, but is it always true? Nope! And no, this is not a call out on pre-conceived notions.

This is about behaviors that affect decision-making and the resulting consequences on any project. It is also about what can you do to avoid such biases and what is the solution.

Behavioral science tells us that human actions, or the lack of, are rooted in our thought processes – many of them subconscious. It is a guess that this “subconscious” bias governs our decisions in business as well. It has also been observed that motivational reasons for decisions is a cognitive bias, also known as the sunk-cost effect.

Sunk Cost Fallacy: The Long and Short of It

It is the “tendency to continue with an endeavour once an investment in time, effort, or money, has been made” (Arkes and Blumer, 1985). This doubles the trouble because most humans tend to be risk-averse and often over-estimate the value.

Decision-makers then become pre-disposed to focus on gains or losses, that happen to be more immediate and “solid” than more distant opportunity gains/losses. To put it simply, cognitive biases in decision making don’t allow you to think about the long-term gain and you get stuck in circles, lured by the short-sightedness.

The sunk cost fallacy is our propensity to stick with what has already been invested into a project and then consider it as valuable information. Now, this is accepted regardless of actually weighing whether or not it is feasible for the project to be continued.

For example, take Case One. Team A has been building a new app that will be released in a few months, but as per the feedback from several test groups, the app has been poorly designed, is not valuable, and even difficult to navigate for users.

What would you do in this scenario?  Scrap the project? That would be the right choice, naturally.

However, in a majority of cases, the opposite happens. Teams stick to the project and instead of redesigning the app by taking more time, it is done in a hurry to meet the deadline. And we all know what happens with shoddy work, don’t we?

The Cost: Investment vs. Time

Let us take Case Two now. Say, you, as a small business owner, have a company with a turnover of about $5 million dollars per annum. Now, one day you get an invoice. You put it off for the end of the day.

When you open it, you realize that you have been overcharged by your mobile operator by $60. It is already late but you also realize that you will have to chase the issue and follow it up until it is resolved. And we all know, time is money. What happens in this scenario is quite obvious. Your time IS going to be wasted.

You could have done other productive things in that time, resting even! It is a two-way loss.  Now, this is not oversimplifying, but even you cannot deny that your time is quite valuable.

But see, here’s the catch!

On the surface, $60 is quite a lot and is tangible, but what you might have gained in that time means endless possibilities – or not at all! Because the latter is intangible. That’s why! You see, what cognitive biases in decision making can cost you? This is how important the opportunity cost is, in business.

Let’s look at Case Three. You must remember the McDonalds Corporation movie. The brothers spent more time perfecting the temperature of the fries being cooked for that perfect taste than they should have spent on expanding their unique business model and furthering the dream of their franchise. That’s another lesson. The importance of opportunity cost in managerial decision making!

Working hard at a task doesn’t mean it will add value to it. Ray Kroc’s multibillion-dollar corporation is a testimony to that fact!

Thinking Ahead: How to Avoid Cognitive Biases in Business?

“The hurrier I go, the behinder I get” so said Lewis Carroll in Alice in Wonderland.

Why rush? Why get fixated?

A thorough assessment is always the answer!

The first step to avoiding the sunk cost fallacy is assessing whether or not a project is successful, not on the basis of what was invested, but what was gained out of it. Keep in mind that money, time and effort are basically the cost of learning from failures. Now, decide the next course of action.

Thus, it becomes important that you correctly estimate the size and value of the opportunity costs of the business because overcoming these cognitive biases in decision making is absolutely critical for the success of your business. But how does outsourcing help you with that? Let us back the goods, eh?

Time is valuable. As reiterated above, time is money! So, it is important how we perceive an opportunity and not what it can bring us in a short amount of time.

It is why cognitive biases are so dangerous, because they create a fallacy, a mirage that the immediate gain is the only thing you are going to get.  Of course, this isn’t to say that there is a correct way on how to be a successful entrepreneur or a business owner. Different approaches work for different businesses and people who run them.

But what is universal is far-sightedness or better yet – a vision.

Most of us focus on the immediate gains or losses right before us. You know, the things we see as tangible. We fail to distinguish the trees from the woods! We fail to see the opportunity cost for a business.

There’s no magic wand, however! So, what is it that the best entrepreneurs can do? They are successful because they seek value and opportunities in the business and project they undertake. To put it simply, they choose higher returns.

Now we have touched upon two factors of cognitive biases.

Now, things were just fine with the McDonalds brothers. The fries HAD to be good. But their fear stopped them from branching out and working on their business model. They spent too much time on “perfecting the taste.” Look at the app scenario. The time was spent already but more time was not taken either, just to meet the deadline. Or look at the $60 bill.

What would you rather be doing?

Outsourcing and Why It Matters: Thinking Big

And this is where small to medium sized established businesses lose. Why think small and why stick to the status quo? The answer to these ‘whys’ is outsourcing!

Think of recruiting for your business, for instance. It could take as long as a couple of months to find the right candidate for a job. Now imagine the amount of work that can be done in those two months alone if you already had the right resource.

Speaking of outsourcing, it is quite evident by the peregrinations of Big Tech – Apple, Google, Amazon and Microsoft. These ‘big four’ are a classic example of opportunity cost gains and what can be achieved if business is done right by outsourcing, offshoring model or even offshoring outsourcing.

Besides saving money on production and labor costs, companies can make strategic use of this practice to generate good gains on saving taxes as well. Moreover, outsourcing saves them office space too.

Also, with time, many small and medium size businesses have started seeing the immense gains made by employing different models of outsourcing. While many have spoken about its effects on local jobs, the effect on boosting local economy is in stark contrast.

For instance, Apple, the Tim Cook-led company, saves a lot of money by outsourcing projects such as its manufacturing. It then uses the same money to invest in its internal business operations and resources. The company’s performance and profits have clearly shown that this approach gives it an edge over its rivals who could produce equally good results if they had the same business efficiency and productivity. Outsourcing is too good to simply ignore!

These scenarios are some of the examples to show what good decision-making can achieve. By utilizing outsourcing to not only on focus on innovation and business model, but also seeing it as a practice to overcome irrational decision-making, businesses can skyrocket their growth.

The Big Tech has gained massively through it. So, why can’t it be your business?

Previous
5 Tips to Help You Determine Whether an Overs...
Next
5 Ways Outsourcing to India is Less Risky tha...