How Social Media Has Changed Your Business

If one were to ask me to pinpoint that one moment when business globally stepped into the 21st century, I will pick a moment of frivolity. The year is 2003; the century is in its infancy. Sitting in his dorm room, Mark Zuckerberg created Facemash. What was his inspiration behind creating a website which would allow fellow Harvard students to rate each other is seriously up for debate. Perhaps he was bored. If he was, it’s fitting really that 21st century’s most successful venture- something that will change not just how we do business, but how we interact, organize, agitate, vote and live- was born out of something that’s also arguably a uniquely 21st century affliction- boredom. As our attention spans have become increasingly shorter, a plethora of distractions have started crowding our spaces- all trying to outdo the other and leave a lasting impression. Essentially, this has gone one to define marketing today and by inevitable extension, how we do business.

One word- reach! Social media platforms are in a sense, absolute democracies. There is hardly a demographic that is not represented on social media, and barring rare cases, in multitude. As chance would have it, social media users form the same cross section which is targeted by businesses globally to market their products and services. Due to practical requirements of literacy and minimum access to technology, the social media users tend to represent the section of the society with actual purchasing power.

Today, users of social media services like Facebook and Twitter number in the billions, accounting for almost a quarter of the global population. And as per statista, “In 2019, it is expected that 72.4 percent of worldwide online population will be accessing social networks, up from 69.6 percent in 2016.”

The below graph will give a fair idea how social media has grown over the last few years. 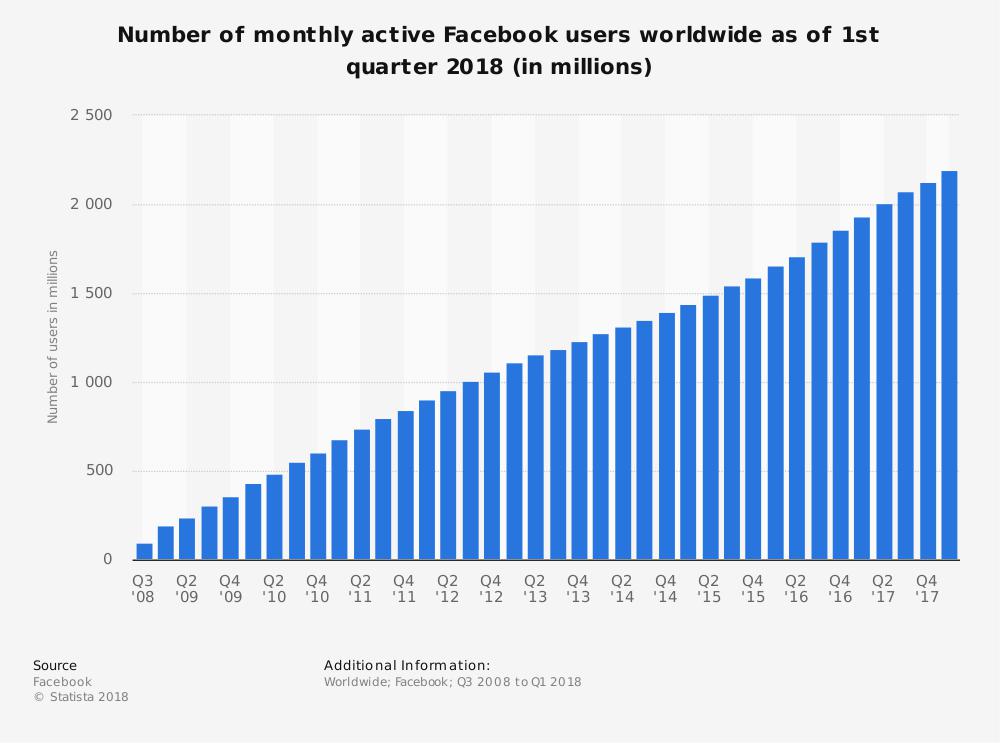 In developed and fast emerging economies, with a large and mature consumer base, the percentages are as high as the high nineties. With this sort of precise penetration and reach, the primacy of social media as a marketing tool was a given.

Since they are, as the name suggests, socializing tools, users end using social media as an extension of their daily lives. From voicing opinions to sharing life events and achievements to dating- social media is omnipresent in every aspect of a user’s life. That also means that a user does not necessarily come to social media to a specific reason. Many users also get their daily dose of news from social media too; all reputed news agencies have an active presence on social media. The users also trust news from social media platforms, as they can see the popularity of news through likes and shares, as well as trusting content which has been shared by people they know or socialize with on such sites. Remember a YouTube content can only go viral if, and only if shared widely on social media platforms, esp. Facebook. Infact, YouTube has worked hard at becoming part of the social media bandwagon itself, evolving from a video sharing website only. This has seen YouTube leave other potential like Vimeo and Dailymotion far behind.

The below illustration will give a fair idea how much time the world is spending on social media in a lifetime. 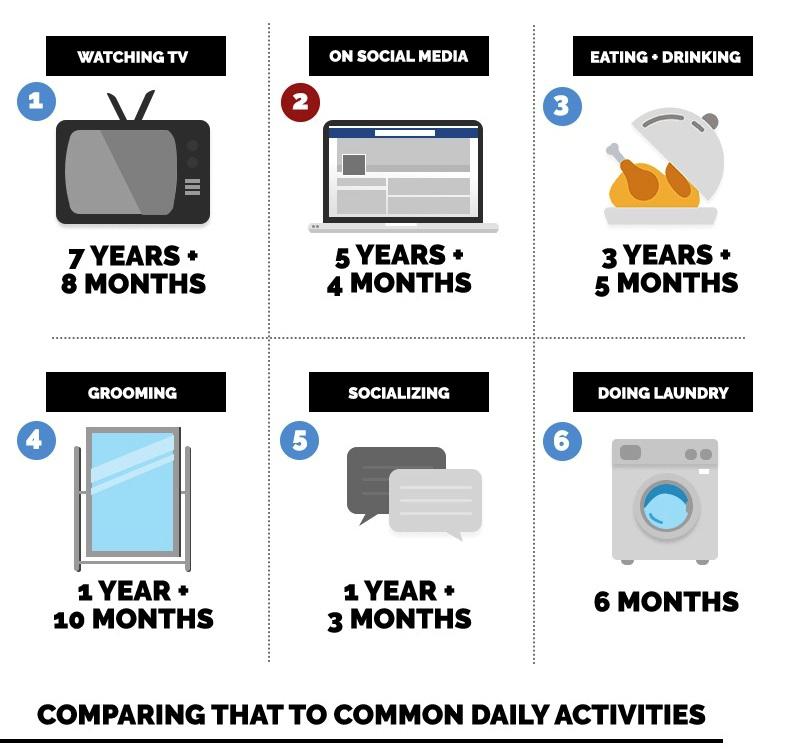 Social media sites are ultimately about data. And since data accuracy has always been a major headache for sales and marketing companies, social media has come as a huge relief. Remember the days of cold calling and receiving emails and flyers from businesses addressed to someone else? Someone who probably lived at your address several years ago. Or they didn’t exist at all, since someone had filled up a form incorrectly to avail some coupon or offer advertised by a marketing agency looking to collect leads! Old data collection and management methods were inefficient and expensive and as a result, marketing teams and agencies were always struggling to identify the right customer.

Not today though. Thanks to social media, marketing agencies are able to carry out highly targeted campaigns. With such precise data available for customers through social media platforms, businesses are able to profile and identify the right customer to whom to market. That has resulted in much higher returns on investment (ROI) for businesses. In fact, this new development has been one of the reasons behind the success of plenty of startups.

Social media also allows businesses real time feedback through customer reviews and comments, while also allowing real time customer service too. A positive overall ranking in reviews on social media automatically builds trust amongst potential customers; though on the flipside, a few bad reviews can spoil all the good work too.

Data collected from social media services like Facebook, which are tied with e-commerce sites like Amazon, help companies indulge in remarketing, a hugely effective practice with high returns.

With data security becoming a matter of concern amongst users and the recent scandals like Cambridge Analytica kicking up a storm, it needs to be seen what changes social media services like Facebook will bring in their data sharing models. By all indications, excessive fake news sharing and digital scams have eroded the trust quotient built through the years between social media sites and users, especially since these vices have managed to establish themselves using the same avenues taken by digital marketing companies. However what is certain, is that social media will continue to be an important part of people’s lives, and as a marketing platform, it will retain its primacy. 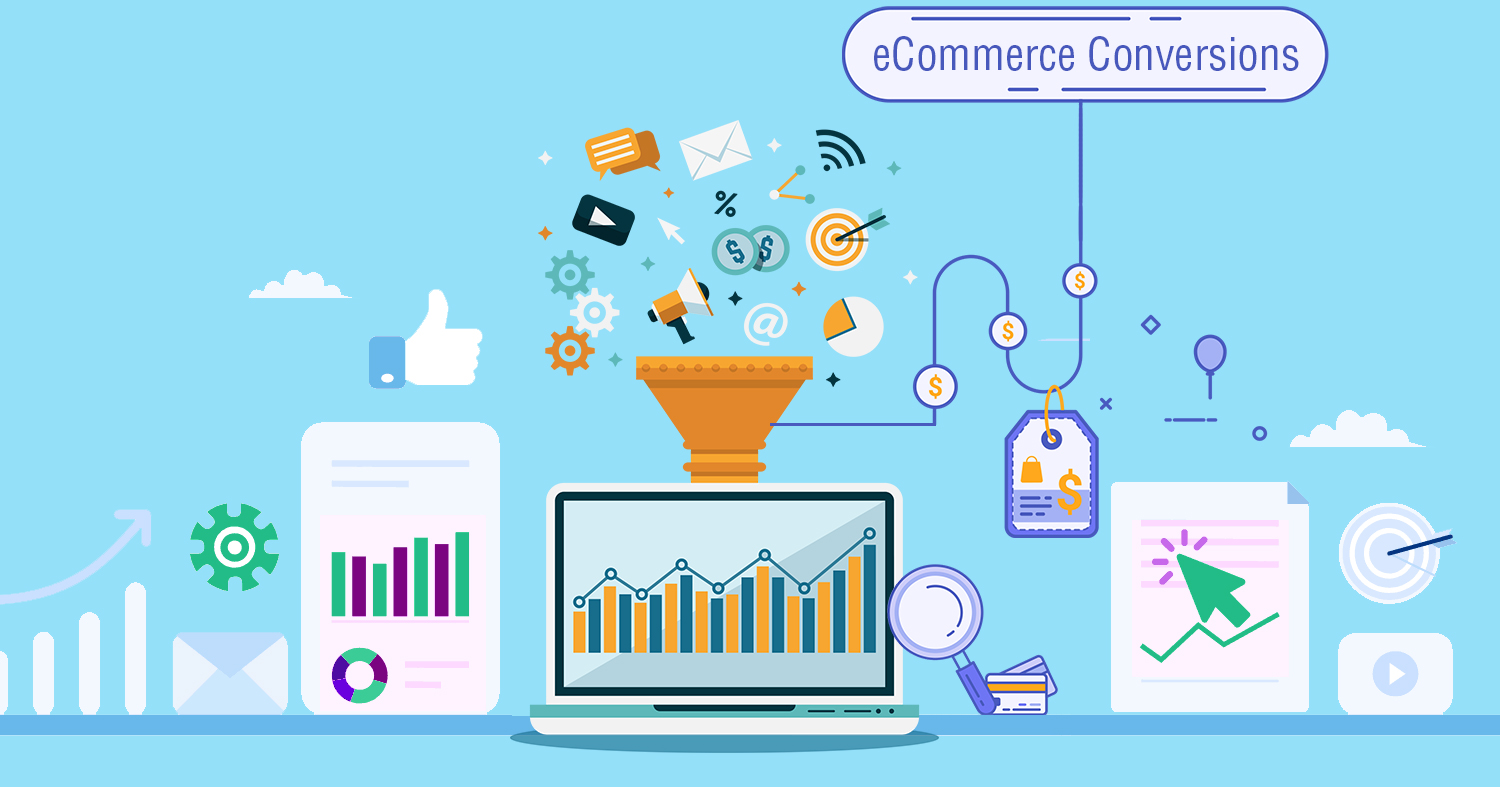