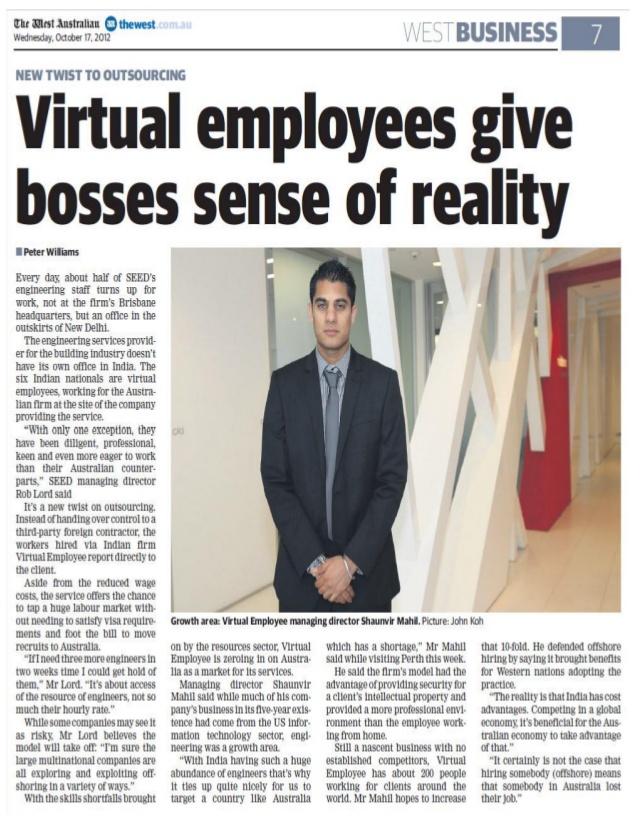 The Managing Director of VirtualEmployee.com, Shaunvir Mahil was part of the 11th Business Mission to Australia, organized by the Indo-Australian Chamber of Commerce from October 13-20, 2012. This high-profile mission visited three cities – Perth, Sydney and Melbourne – and interacted with over 150 companies from a range of industry sectors and with strong interest in Indian markets.

The significant manner in which the Indian outsourcing industry has been impacting Australian businesses, particularly the engineering sector, was evident from the wide press coverage that the MD received. Shaunvir Mahil was interviewed by leading Australian publications such as The West Australian, Perth that ran an article on his Australia visit, aptly titled, ‘New twist on outsourcing’ (October 17, 2012).

In the interview, Shaunvir Mahil spoke about how India had an abundance of talented engineers who were more than adequate to fill the shortfall of enginners being faced by Australia. Moreover, the VirtualEmployee.com business model offered iron-clad security for a client’s intellectual property, with the remote engineers working from a professionally supervised office.

The press report also interviewed one of the clients of VirtualEmployee.com who had hired an entire team of remote engineers from this company. The client expressed great satisfaction at the way his team was working and the total support he was receiving from VirtualEmployee.com’s HR managers.

Previous
VirtualEmployee.com Shortlisted for NASSCOM A...
Next
‘Employee in the Cloud’ concept featured ...