Why is India the world’s Favorite Outsourcing Destination 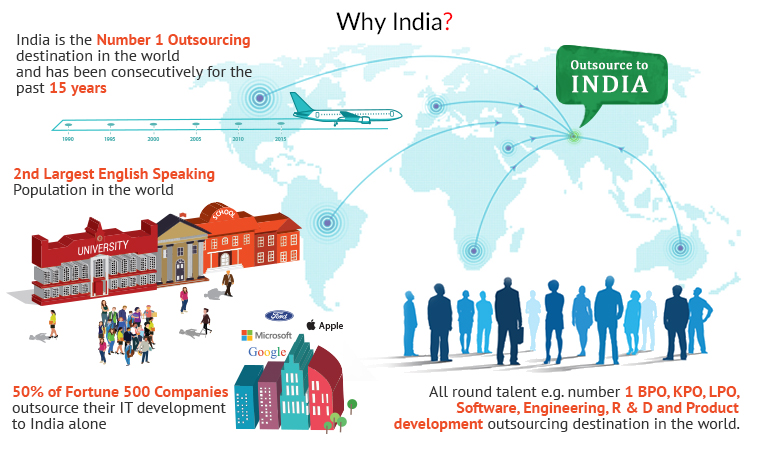 India is a One Stop Outsourcing Destination

With a population of nearly one billion people and 3.1 million graduates per year, India has the largest pool of technical skills in the world. With such a skilled workforce it is easy for job shipping companies to find the talented employees they require at affordable rates.

China is the only other country which comes even remotely close to India in terms of numbers. However, China is not considered an outsourcing competitor to India because professionals in China unlike India do not speak English.

Additionally, India is a “one-stop outsourcing destination.” It accommodates all the job shipping requirements of a company. Jobs such as engineering, accounts, law, graphics design, marketing, HR, date entry, etc. can be sent to India. India caters for a lot more than just call centers or IT programmers.

China is the only other country that comes even remotely close to India in terms of numbers. However, China is not considered a job shipping competitor to India because professionals in China unlike India do not speak English.

“The attraction of India for us was not only numbers but, more importantly, the quality of the talent. We’ve taken on people who are innovative and creative and can really contribute to the business,” says Tom Hyde, STI Upstream business manager of Shell. 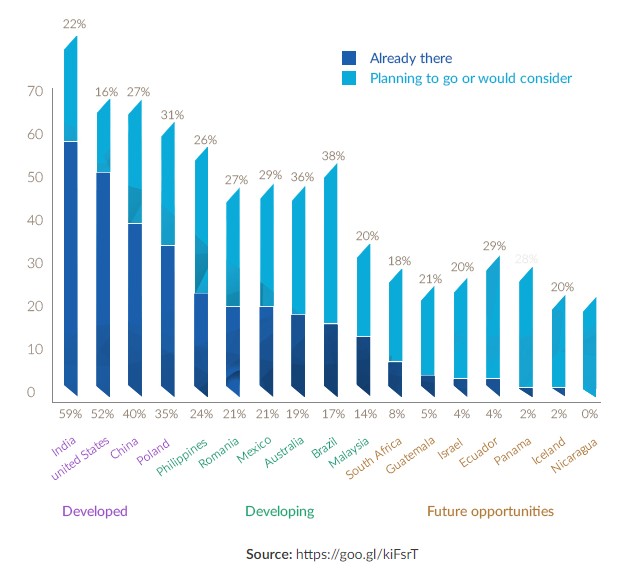 Among the most prominent reasons why companies are outsourcing to India, “as a cost cutting tool” is the biggest reason, followed by “to enable focus on core business” as a close second. Other important reasons are: “to solve capacity issues”, “enhance service quality”, and “access to intellectual capital”. India has one of the largest and most professional workforce in the Asian-Pacific region and that’s the reason IT companies can find well-talented and experienced people for hire.

With 350 million people speaking English, India is the world’s second-largest English-speaking nation. India has more English speakers than the US and the UK combined.

India was a colony of the British Empire until the year of 1947. As a result of colonialism, English is taught in school at a very early age. Many Indians speak English as their first language or at least on par with the national language of Hindi. The significance of English in India is very notable e.g., road signs are marked in both Hindi and English; legal court cases are tried in English etc.

This is one of the key aspects as to why India is the world’s number one job shipping destination. Sending jobs to a country with a large number of fluent English speakers is paramount.

India alone commands 65% of the world’s BPO job shipping market. For one country to alone hold such a significant share of the offshoring market is certainly a reflection of India’s dominance in this industry.

Furthermore, 80% of US and European firms that send jobs and work to remote locations ranked India as their number one destination. 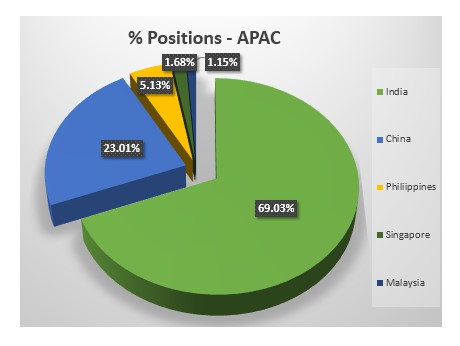 India continues to enjoy an enviable position amount Asia-Pacific countries when it comes to outsourcing. With technology giants like TCS, Infosys & Wipro leading the way, India has garnered over 69% of the outsourcing business in the world. The leading global IT firms have also outsourced to their own or partner-operated centers in India.

India has excellent international data communication links and internet access in major cities. With the Indian economy rapidly growing, the Indian government has invested heavily in infrastructure, technology, and communication links. With significant support from the government, India has been able to build high-tech areas where technology and infrastructure are of international standards.

When companies such as Cisco, Oracle or Hewlett Packard ship jobs to India, they do so because they are confident they will have access to talent, quality results, fast turnaround times and low costs. That so many multi-billion dollar companies send their projects to India is yet another testimony to the fact that India is renowned around the world as the job shipping hub.

“We believe that India is the hub of the world where the ICT sector is concerned,” said Mr. Elfrink (Cisco Systems), following a $1.1 billion investment in India.

“Cost reduction was only part of the reason that companies were considering offshore outsourcing, there were benefits to be had in time-to-market and quality, leading to an adage that companies initially chose India to save costs but stayed for the speed and quality!” (National Outsourcing Association [NOA]).

Google’s announcement about setting up an R&D center in India, reportedly selecting only graduates of the nation’s top schools to be considered for employment. The company’s move reflects the mindset that shipping jobs to India is not just about low cost but also about Indian’s vast talent pool.The quality of work done by Indian talent is so good that even the world governments prefer to outsource to India.

India had a GDP growth rate of 9% for the fiscal year of 2007-2008. If India can maintain this rate of growth (which it has done for the past several years), India will be the first developing nation that used its brainpower, not natural resources or the raw muscle of factory labor, as the catalyst. This is a tribute to and reflection of India’s huge talent pool of educated professionals. This is why Western firms choose India over other job shipping destinations.

Everything You Need to Know About Virtual Assistants

A virtual assistant is someone who offers support services to a business from a remote location. Such assistants typically take care of

Top 15 Tasks a Virtual Legal Assistant Can Do for You

According to Deloitte’s 2020 Global Outsourcing Survey, out of the 40 interviewed executives across their clients, service providers and lawyers globally, 70%

When it comes to medical revenue service collections, every medical practitioner needs an expert on their side to make things happen. After