Outsourcing is the Outcome of International Trade 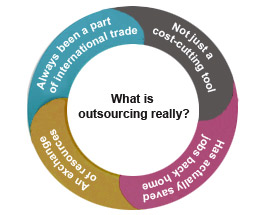 After all, outsourcing these jobs, many involving customer care, will keep their customers happy and, in return, they will receive high-quality consumer-company interaction. All in all, as a result, it ultimately does not add much to the final cost they pay to buy an IBM product or service back in America.

There’s also the fact that for every job that IBM has outsourced, it has also saved jobs of people that it could have let go in the U.S. - due to hugely escalated costs of customer care services, marketing, product research and development, and other manpower-intensive jobs.

Integral to outsourcing are input costs that ultimately form the price of a product or service. As every worker is a consumer and many consumers are also workers - neither the consumer nor the worker would want to pay an unnecessary premium for what they consume.

Jobs and capital do not stay in one place - considering that most countries have decided, under the ambit of World Trade Organization, to resist from being protectionist and be liberal in trade.

Inflation, recessionary forces, oil prices, domestic interest rates, and level of employable people - all have clearly determined that presently, in the U.S., many manufacturing and service activities just have to be outsourced to keep their prices down for American consumers.

The alternative to this is that American companies stop outsourcing. They hire U.S. workers (whose cost to the company is much higher) for consumer care, R&D, and other business processes. They also hire more in general and specialized staff to look after activity-intensive work such as legal research and data entry.

Just adding up these costs (in U.S. dollars and not in much cheaper currencies of India, the Philippines, or Malaysia) is a nightmare - both for the American consumer and for a U.S. company.

Instead of stopping or controlling outsourcing, job losses resulting from outsourcing, can be addressed by the U.S. by improving fiscal management in controlling input costs in American cities, and by spreading areas of job creation - rather than concentrating on hi-tech manufacturing.

Nevertheless, what stands out in IBM’s announcement, and here the naysayers of outsourcing and American tax payers must pay attention, is that according to IBM they had nowhere to go except stay put in India.

When asked why IBM was outsourcing jobs to India and expanding business in the services sector in India, its senior advisory consultant Selby Mascarenhas said, "There was no need to lay off Indian workers since Indian workers are cost effective compared to their counterparts abroad.”

This statement has to be considered in the “corporate context” rather than a “social context”.
If IBM gets domestic service outsourcing contracts from India’s state-run companies to run operations in many of the 14 Indian cities it has offices in, and in the process ensures that the company remains profitable in India - then outsourcing is not such a bad deal.

IBM’s profits in India help the computing giant in maintaining customer satisfaction and profitability in its main operations within the U.S.
IBM won’t mind if its American consumers send out a collective thanks to the “Indian outsourcing worker”.

Outsourcing is not as simple as a cost-cutting decision

While simple on the surface, the decision to outsource is a major strategic undertaking for most companies. In other words, companies in the U.S. or Europe don’t sit down and ask themselves how many jobs they should let go so that they can begin outsourcing.

Discussing the pros and cons about outsourcing involves evaluating the probable reduction in costs against the consequences of a loss in control over production or performance of a certain business function.

There are also other considerations as well - economic effects, political consequences, and even cultural limitations.

The American consumer must know that while the opportunity to outsource and offshore is never taken lightly, there are always risks to be considered and borne when deciding to outsource.

Outsourcing does not operate, or even begin, in a vacuum.

International trade is all about exchange of resources to get the best results from them and outsourcing is part of the same phenomenon. Therefore, international outsourcing is not really a new thing. The US imports products that it finds rather expensive to produce domestically and in the same way produces commodities that it can manufacture cost-effectively and in turn exports them to overseas locations. In the same way the whole economy of the world thrives by depending on each other.

When each country is allowed to specialize in what they do best and most cheaply, the overall world economy progresses. This system, on one hand increases the efficiency of economies and on the other paves the way for innovation in technology as well as the products.

Outsourcing and the 'unthinkable'

Off late, outsourcing has become an infamy because of the sheer number of jobs transfers it entails. This business practice is rendering high-tech services vulnerable to displacement that were once considered to be immune. It the advancement in IT and communication that has brought about this change. Earlier, services like back-office operations, call centers etc. were out of the reach of trade; however, now such jobs have come under the purview of trade displacement.

Outsourcing is news. Cost savings and indirect job creation through outsourcing is not worth writing about as compared with the fallouts of outsourcing as it is “good news” or “regular news”.

In the contexts outlined above, it would then be apt to ask whether IBM would have won outsourcing contracts from Indian state-run companies had it not been having an active outsourcing presence in India. And can even a behemoth such as IBM chose to ignore outsourcing’s various benefits despite an outcry in America against outsourcing?

The answer is: no. Because IBM would have looked at India’s talent pool, their cost, trainability, motivation, and long-term profitability, and the fact that U.S. customers want not just good service - they demand, and are used to great service. Can any company disregard this? Again the answer is: No.