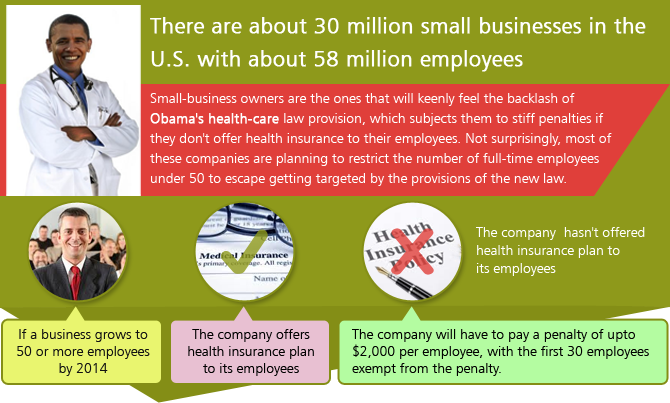 Outsourcing To The Rescue Of SMEs Reeling Under ObamaCare's Employer Mandate

It is indeed ironic that the man who campaigned so vigorously against outsourcing should play the biggest role in pushing SMEs towards that 'escape route' in order to escape the employer mandate of ObamaCare. US President Barack Obama's Patient Protection and Affordable Care Act 2010 – famously known as ObamaCare or the "Health Care Law" – which he signed into law on March 23, 2010, is aimed at increasing the number of insured Americans and reducing overall health care costs. But, in an ironic twist, this ambitious healthcare plan has also created unexpected berth for none other than outsourcing – Barack Obama's bugbear – since it directly impacts big and small businesses across America.

What is ObamaCare all about?

In brief, the provisions of this law make it mandatory for any company that employs more than 50 employees to provide healthcare insurance to them – that is, employer-subsidized health insurance, the cost of which could be approximately $4,000 per worker or even more. Failure to comply with the law's provisions could set the offending company back by as much as $2,000 per full-time employee.

Trade analysts are of the firm view that ObamaCare’s employer mandate can actually backfire as it carries within it anti-growth provisions. After it comes into action, a majority of American businesses will have no choice but to toe the line and offer health insurance to their employees or be prepared to cough up extra federal taxes for failing to do so. However, this huge cost can severely hurt companies - hurt profits - during already lean times.

How will ObamaCare affect SMEs?

ObamaCare ostensibly aims to provide health insurance for every American; but in reality what it translates into is that the healthy shall pay for the upkeep of the poor when it comes to health. And employers have been arm-twisted into seeing to it that it happens. So, even if a firm wishes to expand its operations base by hiring new employees, the new law is going to stand as the biggest stumbling block between progress and the dream of making it big for the scores of SMEs across North America. It will be simply too expensive for small and medium sized firms to hire workers in the future because once they cross the 50-employee mark, they automatically would have to comply with Obama's new federal law. Job losses and a gradual slowdown of the hiring process are just a few of the negative repercussions that would occur.

Caught between the devil and the deep blue sea, SMEs are scrambling to outsource as the most effective escape route to avoid getting sucked into what could be a very financially draining arrangement. Once companies reach a 50-employee strength, they are more likely to turn to outsourcing rather than come under the new employer mandate.

Outsourcing has always been a boon for firms across the developed world who have desired to combine profits with costs savings and enhanced productivity and efficiency. However, within outsourcing there is the freelancing model and the project outsourcing model, neither of which is truly suitable for all small firms. Then there is the remote staffing option in which an SME can actually hire virtual employees to handle their outsourced work but without losing any control as in the other models.

In lean economic times, when an SME can scarce bear the burden of having to shell out hundreds of dollars for the health insurance of their employees if the number crosses 50, the remote employee model is the best option. This is not really outsourcing but akin to hiring local employees who work for them exactly like in-house employees, albeit remotely from the offshore service provider's office. The client (the SME) gets to handpick the employee(s) of their choice and build as big or small a team as they want. So, if they wished to expand beyond the 50-employee mark, they can easily do so simply by intimating the service provider's HR department and kickstart the recruitment process again.

Hiring virtual employees enables an SME to easily scale up its employee strength as much as it wants without feeling the stranglehold of ObamaCare. It continues to grow and expand, and yet escape the employer mandate that would doubtless halt many a hiring process.

Did Barack Obama stop to think about the long-reaching effects of his new law? While the new law would bring every American under the ambit of health insurance, it would also put a huge financial burden on those companies who are barely able to stay afloat. And even if they wanted to employ more people, they would have to think twice before doing so just to safeguard their own interests. This would effectively mean that jobs that could have gone to deserving Americans are simply not being created only because of an unsavoury law. Small firms with less than 50 workers on their payrolls will have virtually no incentive to want to expand. Their small profit margins would simply not permit ambitious expansion and growth plans that would include the substantial cost of comprehensive health care insurance to all their employees.

ObamaCare could well be the single biggest reason for unemployment, artificially-created job losses and a general slowdown in growth in America as it imposes new costs and responsibilities on employers already burdened by spiraling expenses.
“Small businesses traditionally generate more than 70 percent annually of all new jobs created in the United States. It is argued that such a mandate could be a job killer that may cause an already high unemployment rate to get even worse.”

Critics of the Health Care Law are of the opinion that this employer mandate provision could seriously hurt small businesses that have more than 50 workers and that cannot afford to offer health coverage. Naturally, this could well be the single biggest cause behind a curb in hiring among such companies who would look for ways and means to keep their headcount down.

The National Federation of Independent Business, which unsuccessfully challenged Obamacare in the U.S. Supreme Court, contends, among other complaints, that once the law comes into effect, it will become “extremely expensive” for any employer to cross the 50-worker threshold. Even if a restaurant expands its strength from 49 to 50 employees it could well face the $40,000 penalty for not providing health coverage, the group says.

“A business can avoid the penalties by firing employees, by not hiring new ones, by replacing full-timers with part-timers, or by outsourcing. Estimating the costs of hiring and expanding will be complex and confusing,” NFIB says.

According to IFA President and CEO Steve Caldeira, “About 3.2 million jobs at franchise businesses would feel the heat of the employer mandate provision, which will fast emerge as the biggest discouraging and disincentivizing factor as far as creation of new jobs and business expansion is concerned.”

When ObamaCare comes into effect, it will probably find that SMEs have insulated themselves against the employer mandate by seeking refuge in remote staffing as the only way to stay afloat in economically struggling times.